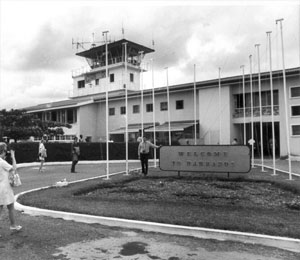 Grantley Adams International Airport is strategically situated on the eastern fringe of the Caribbean basin and forms one of the most important links in the aviation infrastructure of the region.

The forerunner of Grantley Adams International Airport was Seawell Airport which came into being in 1956 after a Royal Netherlands Airlines (KLM) plane landed on a grass runway in 1939. In 1940/41, the Barbados government recognised that if an important and vital link was to be maintained between Barbados and the outside world, a paved runway was an absolute necessity.

The new building was completed in 1956 and though it served Barbados well for 23 years, it became outdated almost as soon as its door were opened because of the rapid growth of air traffic. The present air traffic control tower was completed in 1976 and later that same year the airport was renamed "Grantley Adams International Airport" in honour of Sir Grantley Adams, Prime Minister of the West Indies Federation and now a National Hero of Barbados.

Another landmark occasion for GAIA was November 1, 1979 when the new terminal was opened. The building was constructed at a capital cost of $28 million BDS. The terminal is an imposing building of  grey concrete offset by the greenery around.

Keep a change of clothes in your hand luggage – just in case of delays in bags arriving at your destination when you do, or an unforeseen delay.